Plans and visions for the Swedish Exhibition & Congress Centre 2016-2030 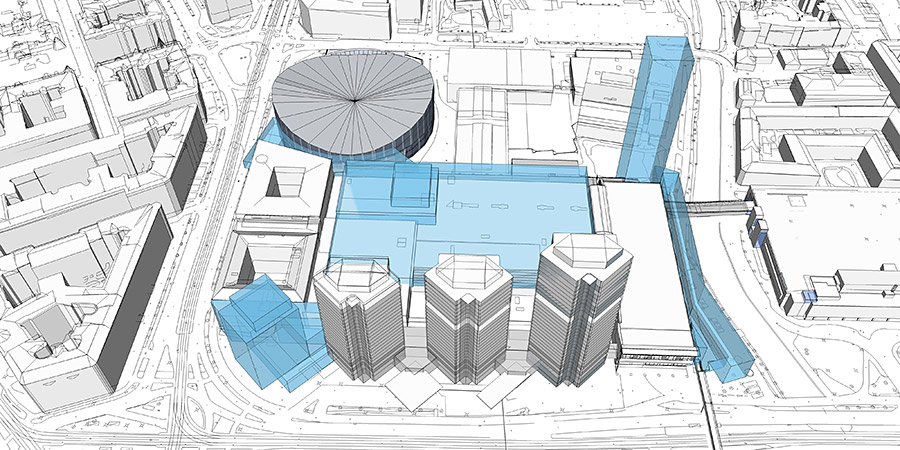 The Swedish Exhibition & Congress Centre sees good scope for growth over the coming years and plans to increases its capacity to create new experiences for Gothenburg residents and out-of-town visitors. The investment plan totals at least 320 million euros up to 2025 and comprises two new towers along with improved entrances. The venture is then planned to continue through until 2030. A request for a formal decision regarding the first stages is to be submitted today to the City of Gothenburg.

“We want to take the next step and move up a gear with our attraction power to further develop the Swedish Exhibition & Congress Centre and bring in more visitors to our venue and to Gothenburg,” says Carin Kindbom, President and CEO, Swedish Exhibition & Congress Centre. “Our vision is to create Europe’s most attractive meeting venue by offering the best total experience.”

The Swedish Exhibition & Congress Centre enjoys a city-centre location that helps it stand out amongst European competitors. December 2014 saw the inauguration of the biggest investment to date by the Swedish Exhibition & Congress Centre. A total of 130 million euros was invested in the venue between 2011 and 2014, including a third hotel tower with 450 new rooms. In 2015, turnover increased by 30 million euros and visitor numbers by just over 20 per cent.

“With the level of interest and the growth rate we are seeing now and for the period ahead we find now to be a good timing for launching our future plans, a bit earlier than originally planned. We are now laying further foundations for continued expansion, all to take advantage of our unbeatable city-centre location,” says Roger Holtback, chairman of the Swedish Exhibition & Congress Centre Foundation.

The improvements planned by the Swedish Exhibition & Congress Centre between 2016 and 2030 are as follows:

A. Development of the Liseberg entrance (entrance 2) and addition to the Arcade alongside Mölndalsån, riverside zone, opening up new areas for meetings, exhibitions and sports activities, for example.

B. A building facing the riverside zone with accommodation facilities, workplaces and public halls. This could be a tower of around 110 metres and 35 storeys.

C. Development of entrance 5 and a taller building facing Korsvägen. The building is intended to be roughly 18 storeys high, principally housing an augmented entrance function, hotel rooms and offices.

D. A substantial upgrade to the exhibition halls and addition of a third floor, with a permanent location for our show venue, The Theatre.

The request for a formal decision submitted to the City of Gothenburg covers stages A and B. The development of the entrance (A) must meet future needs for an increased number of visitors and create a new entrance for the venue, providing better visibility and being both protected from the elements and welcoming.

The high-rise building facing the riverside zone (B) is intended for the Swedish Exhibition & Congress Centre to contribute capacity for increased accommodation in the experience field. The accommodation building enjoys a fantastic location with views over the city and proximity to services, communications and events.

“Our mission is to promote trade and industry,” says Carin Kindbom. “We believe in our vision and want to accelerate our development in order to counter the ever tougher global competition. For every krona spent at the Swedish Exhibition & Congress Centre and Gothia Towers, a further SEK 2.50 or so is spent in the city of Gothenburg. This is our way of contributing to the city’s hospitality industry and income.”

“The ambitious plans and visions now being presented by the foundation are a sign of our great belief in the future, but naturally it must be possible to adapt to the realities we may encounter en route to becoming Europe’s most attractive meeting venue,” says Roger Holtback.

The Svenska Mässan group is owned by the Swedish Exhibition & Congress Centre Foundation for the purpose of promoting trade and industry. The foundation is financially independent, which means that it has no other owners or investors. All investment is on its own merit and all surplus is reinvested in the business. The work of the foundation is characterised by short decision channels and a high level of commitment.

Between 2011 and 2014 the Swedish Exhibition & Congress Centre undertook its biggest investment ever. A total of 130 million euros was invested, and this included a third hotel tower with 450 new rooms at Gothia Towers, making it one of the ten largest in Europe with its total of 1.200 rooms. The investment also included a number of other initiatives such as a spa, restaurants, lounge areas, art and pop-up shops. This venture has yielded results and created greatly improved conditions for developing and attracting trade fair and conference business. In 2014, the group generated 250 million euros for the Gothenburg region in visitor industry revenues and the number of visitors to the venue increased to 1.4 million. The turnover today totals just over 110 million euros.

APPENDICES
Policy statement: All-in-one concept generates growth
Illustration of the Swedish Exhibition & Congress Centre in year 2030
Illustration of stage A and B
Image of Carin Kindbom, President and CEO, and Roger Holtback, Chairman